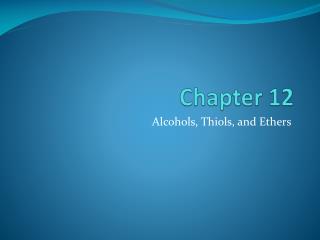 Chapter 12. Alcohols, Thiols , and Ethers. Alcohols. Contain the –OH group as in R-OH. Nomenclature of alcohols: Find the longest chain of C’s, which also includes the –OH group. Change the –e at the end of the usual base name to – ol .