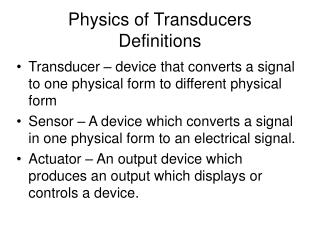 The Basic Components of the Ultrasound Probes Machines - Generally, devices of this kind are made of eight basic pieces:

Sensor Technologies - . describe how well a system preserves the phase relationship between frequency components of the

4. Distance and displacement (displacement as an example of a vector) - . b. example 1: the distance between points a and

Electric Potential, Energy and Capacitance - . energy. electricity is how we transport and expend a large part if not the

GENERATING AND DETECTING OF ULTRASOUND - . the piezoelectric effect. *certain substances change their dimensions when an