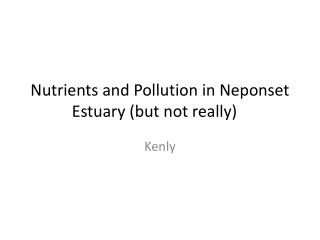 Restoring Eelgrass to the Neponset River Estuary - . the influence of salt marshes. goals of neponset restoration.

NUTRIENTS - . nutrients. living matter is made of cells , but what are cells made

Water Pollution - It is a hard truth to swallow, but nature does not care if we live or die. we cannot survive without

River Pollution - . pollutants found in rivers, lakes, and streams can eventually contaminate not only plants and animals

Soils and Environmental Pollution Chapter 18 - . of these 5 fates, inorganics are subject to 4 –all but degradation.

NUTRIENTS - . page 147. water. is the most important nutrient for any pet! they can go for long periods without food but

Nitrogen and other Nutrients in Agroecosystems - Nitrogen in ecosystems . nitrogen:essential for plant and animal

Historical changes in the uses of the Neponset estuary by its surrounding society - . todd b duval. pre-european contact.

Energy, matter and radiation - . (much more interesting than it looks like) (well not really, but shut up and take