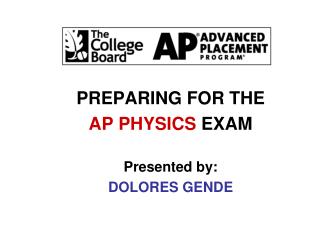 Preparing for the AP Environmental Science Exam - . getting organized to study. you are putting information in long term

Preparing for the AP Macroeconomics Test - . prepared by dr. seth rhine, which doesn’t really matter much . table of

Preparing for the Essay Exam - What makes a well-written essay exam?. it is focused.be sure to answer the question

Preparing for the CPA Exam - After pursuing your master of science in accounting, you might be thinking of taking the cpa

Preparing the exam - . i need to. pick 3 topics speak for 5 minutes on the topic selected by the teacher answer the

The AP Exam - S. ome. scary. not to be confused with mrs. beckwith! . tuff. the ap exam. what you need/want to know.

The AP Exam - . what it is and how to pass it. part one: multiple choice. counts as 45% of your overall score 55 items in