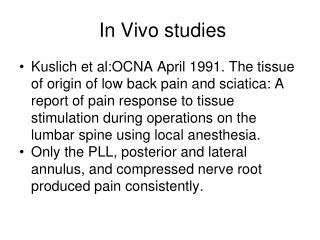 In Vivo studies. Kuslich et al:OCNA April 1991. The tissue of origin of low back pain and sciatica: A report of pain response to tissue stimulation during operations on the lumbar spine using local anesthesia. Waivers of in-vivo BE studies - . evaluation of quality and interchangeability of medicinal products 10 – 14 september

Waivers of in-vivo BE studies - . evaluation of quality and interchangeability of medicinal products 5 – 9 november

IN VIVO STUDIES IN ANIMALS : PRECLINICAL PHARMACOLOGY - . an essential step between molecular and human studies for

Models for in vivo and in vitro studies on basophils - . trainer: franco falcone. introduction. basophils were

VIVO - A research database for uf. vivo. what can vivo do?. generate biosketches generate publication, contact,