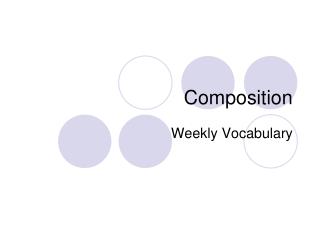 Composition. Weekly Vocabulary. Week 1. Absurd (adj.). The idea that Samantha would fail her test was absurd ; she had studied through the night. Acute (adj.). The acute pain in Jodi’s neck kept her from performing in the talent show. Conjure (v).

Earth’s Composition - . lesson 1: layers of the earth sc.7.e.6.1. student will be able to describe the different layers

The Language of Composition Chapter 2: Close Reading: The Art and Craft of Analysis - . ap english language and

English Comprehension and Composition – Lecture 23 - . objectives: what is a memo kinds of memo how to write an

Composition - . of functions. by: dr. julia arnold. composition is a binary operation like addition , subtraction,

Composition - . composition. refers to the placement of elements on the picture plane. some artists do this by instinct,

Composition - Composition can be defined as the orderly arrangement of elements in a scene which, when taken as a whole,

Chemical Composition of Stars - . what is the purpose of fingerprints? how are fingerprints useful? where do you see