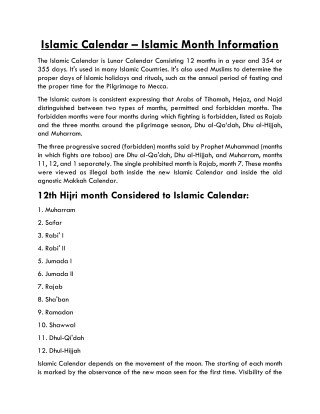 The Islamic Calendar is Lunar Calendar Consisting 12 months in a year and 354 or 355 days. It's used in many Islamic Countries. It's also used Muslims to determine the proper days of Islamic holidays and rituals, such as the annual period of fasting and the proper time for the Pilgrimage to Mecca. A BALANCED ISLAMIC VIEW ON MUSIC &amp; SINGING - With the name of allah, all-merciful, most merciful. a balanced

Islamic Jeopardy - . by nur kose 2011. islamic jeopardy quiz. how many ayahs are in surah baqarah ?. 286 ayahs. how many

Islamic Culture and Art - . islam is considered the fastest growing religion in the world. there are approximately 1.3