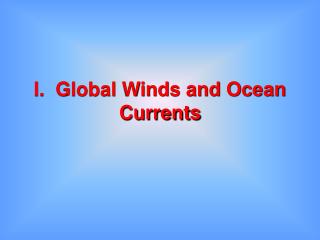 I. Global Winds and Ocean Currents I. Global Winds and Ocean Currents. A. Origin of Ocean Currents. Drag exerted by winds flowing across the ocean causes the surface layer of water to move. Winds are the primary cause of surface ocean currents. Planetary Winds. Interaction of: Mid-Latitude southwesterly winds

I. Global Winds and Ocean Currents

Love’s Philosophy - . percy bysshe shelley. the fountains mingle with the river. and the rivers with the ocean. the

Atmosphere, Weather, Maps, Currents - . what is the atmosphere? why is the sky blue?. troposphere [turning]. stratosphere

OCEAN RESOURCES - . improvements. when was plastic first made? a graph on plastic consumption! how much gold in ocean?

The TEKS - . know that climatic interactions exist among earth, ocean, and weather systems. 8.10 (a) recognize that the