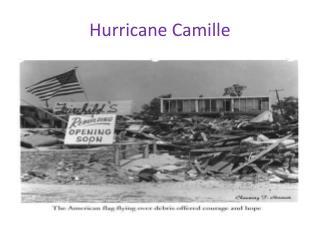 Hurricane Camille. On Sunday evening, August 17, 1969, a small, fierce hurricane skirted the mouth of the Mississippi River and, at 10 PM, thrust inland on the Mississippi Gulf Coast .

Hurricane Frances - . modis view of hurricane frances (note that eye is present but clouds at base of eye make it look

I. Hurricanes A hurricane is 1 . The largest, most powerful storm - 2. an intense area of tropical, low pressure 3. a

Hurricane Preparedness - . the osceola county sheriff’s office bob hansell, sheriff. you should be able to answer the

OMG, A Hurricane! - . by: kaylin, madalyn, and kaitlin. hurricanes. hurricanes are also known as tropical cyclones,

Hurricanes By Owen and Matt - . hurricane winds can move faster than a speeding train.

Hurricane Storm Surge Modeling - . objectives. define the characteristics of a hurricane and the hazards associated with

Hurricane Preparedness for Kids - What is a hurricane???. a hurricane is a severe tropical storm that forms over over