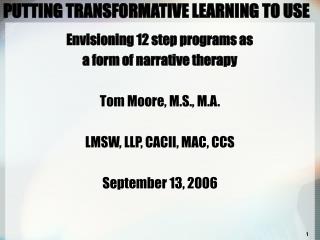 PUTTING TRANSFORMATIVE LEARNING TO USE PUTTING TRANSFORMATIVE LEARNING TO USE

Putting The &quot;I&quot; In Team: Getting Individuals To Play For One Another - . presented by: gordon corsetti.

Learning - . chapter 5. define learning. learning is a relatively permanent change in behavior as a result of experience.

Putting It All Together: The ESRI Product Line - . rudy prosser aisha jenkins. overview. esri has many products which

Adult Learner Stereotypes based on Knowles assumptions Independent Self Concept