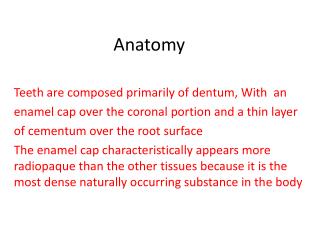 Anatomy. Teeth are composed primarily of dentum , With an enamel cap over the coronal portion and a thin layer of cementum over the root surface Chapter 4 Anatomy of the Nervous System - . structure of the vertebrate nervous system. neuroanatomy is the anatomy of

ANATOMY OF THE ABDOMEN - . by dr. ahmad kamil shahwan ph.d. general surgery. the abdomin. the abdomen is the region of

The Cardiovascular System: The Heart Anatomy - . 18. heart anatomy. approximately the size of your fist location superior

ANATOMY OF PLEURA - . dr. mujahid khan. location. the pleurae and lungs lie on either side of the mediastinum within the

Anatomy and Physiology of the Cardiovascular System - . prepared by miss fatima hirzallah. the heart is a hollow,