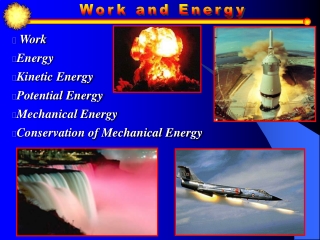 Phys1111 - Energy. . energy is defined as the capacity to do mechanical work . forms of energy kinetic energy (ke) :

Kinetic and Potential Energy - . investigation one. kinetic and potential energy. law of conservation of energy. energy

Conservation Of Energy - . define energy:. it means doing work as provided by physical or chemical resources. we use

Conservation of Energy - . what is energy?. energy makes change possible. science definition: energy is the ability to do

Conservation of Mechanical Energy - . chapter 6. energy. as you know, energy comes in many forms . kinetic energy

ENERGY - . energy cannot be created or destroyed, it can only change forms. what is energy?. energy is the capacity of a

Energy - . how we use our resources. discussion. what are five (5) ways you use energy every day?. what is energy?.

Chapter 7 - . energy and persistence conquer all things. -benjamin franklin. energy. what are the different types of

Mechanical Energy - . what is mechanical energy? the “something” that causes work to be done what kinds of mechanical