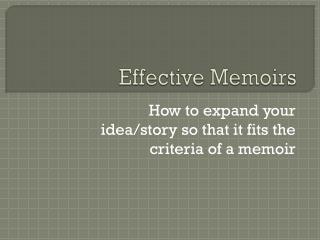 Effective Memoirs. How to expand your idea/story so that it fits the criteria of a memoir. The Lead…. The lead brings readers right into the action of the story rather than being an introductory paragraph of facts. College of Dentistry Effective Presentations - . this afternoon we will consider instructional technology in higher

LEADERSHIP III FOR FIRE AND EMS: STRATEGIES FOR SUPERVISORY SUCCESS - . coaching. objectives. the students will: identify

The Effective Use of Capital - . why worry about bank capital?. capital requirements reduce the risk of failure by acting

Effective Investigations - . curtis leonard sumner school district august 29, 2013. what is the cost of an ineffective