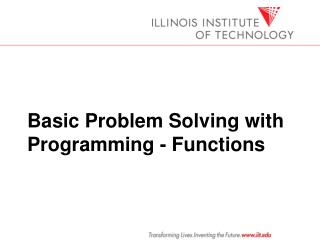 Implementing the Problem-Solving/Response to Intervention - . minooka school district 201 response to intervention. if we

C++ Programming: From Problem Analysis to Program Design , Fifth Edition - . chapter 1: an overview of computers and

Unit1 C Programming and Intro to Linux - . a crash course for c++/windows users. c vs. c++: differences. c does not have

Chapter 6 - . problem solving and algorithm design. chapter goals. determine whether a problem is suitable for a computer

Problem Solving and Decision Making - . problem solving involves making a series of decisions: deciding that something is