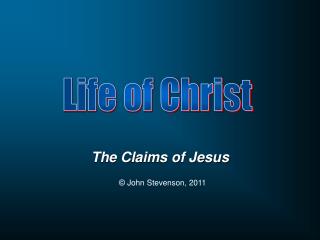 Life of Christ. The Claims of Jesus. © John Stevenson, 2011. All four Gospel Accounts begin with a Statement of the True Identity of Jesus. Matthew. The record of the genealogy of Jesus the Messiah, the son of David, the son of Abraham (1:1). Mark. Jesus’ Claims of Deity - . the gospel record. “at this gathering [the council of nicaea],” teabing said, “many

Jesus’ Claims of Deity - . the gospel record. “at this gathering [the council of nicaea],” teabing said, “many

Peoples’ Responses to Jesus’ Claims: - . 1) family calls him crazy &amp; tries to take him into custody 2)

Sightings of Jesus - Jesus in the Marble, - 1888 pressrelease - jesus in the marble is a clear depiction of jesus christ

Insurance Claims and the CMS Form Types of Claims - Paper claim; submitted on paper via fax or regular mail electronic

The Testiomony of Jesus - . if god speaks…. what he says prevails over all other claims even if it doesn’t make sense

The Resurrection of Jesus - . is it the central event in human history? or is it a fraud?. you are invited!. 2010

The Teaching of Jesus - . teachers. we all probably remember a favorite school teacher perhaps we remember a good bible

The Death of Jesus - . lesson 2 how does jesus’ death provide forgiveness of our sins?. who is responsible for jesus’

The Death of Jesus - . lesson 3 how do we receive forgiveness of our sins through jesus’ death?. how does jesus’