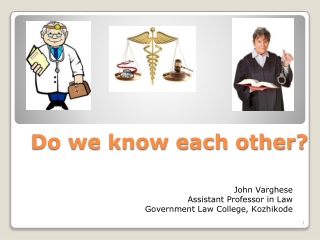 Do we know each other?. John Varghese Assistant Professor in Law Government Law College, Kozhikode. Agenda. Who are lawyers?. What is the relationship between law and medicine?. How can we Sync?. Role of lawyer in Society. Are We Meeting the Human Needs of Patients? - Are we making a difference? time to put the patient experience at the

DAY IN THE LIFE OF A GP DOCTOR - . ib learner

Doctor Appointment Online - Lybrate assist patients to find the best doctors in india and book schedule with them. locate