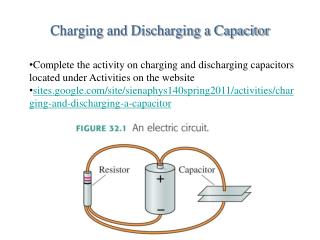 Charging and Discharging a Capacitor

Charging and Discharging a Capacitor. Complete the activity on charging and discharging capacitors located under Activities on the website sites.google.com/site/sienaphys140spring2011/activities/charging-and-discharging-a-capacitor . Tactics: Using Kirchhoff’s loop law.

Charging and Discharging a Capacitor

Capacitor - . construction. a capacitor is a device that sores electrical charge. it is constructed of two parallel

RC (Resistor-Capacitor) Circuits - Ap physics c. rc (resistor-capacitor) circuits. an rc circuit is one where you have a

First-order RC Circuits: - . in this section, we consider transients in ckts that contain independent dc sources,

PROCESS OF CHARGING AND DISCHARGING IN A CAPACITOR - . end of the lessons, student should be able to ;. explain the

Combinations of Capacitors - . parallel and series combinations. three capacitors (c 1 , c 2 , and c 3 ) are connected in

capacitor - . they are important in both electric &amp; electronic circuit. have you seen any of them before ?. where