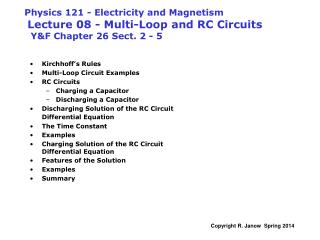 Interfacing Methods and Circuits - . chapter 11. introduction. a sensor/actuator can rarely operate on its own.

Examples of Inductors - . what are inductors good for?. storing, releasing energy (like capacitor) timing circuits (with

DC Circuits - . unit 4. review from last unit. let ’ s review some of the major points we covered at the end of last

Hydraulic Circuits - . introduction. a hydraulic circuit is a group of components including one or more pump, actuators,