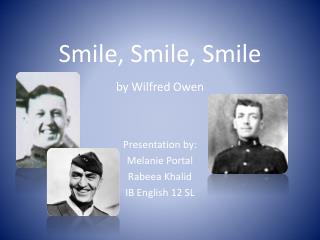 SMILE……. - Smile……. your smile is so important…. . a smile is the light in your window that tells others

Smile - . by: raina telgemier. just an ordinary day at my girl scout meeting! i got driven home from my friend’s

Smile - . and the whole world smiles with you. did you just smile? think about how a simple picture, sent by someone you

SMILE - . smiling is a great way to make yourself stand out while helping your body to function better. 10 reasons to

SMILE - . can help achieve in a second. what would otherwise take. a great deal of time. pause for a moment. silence.

SMILE - Ideas. smile. mod e rn. of. likes. some. enjoys. and. we smile the same language. smile. comrunet. this is a

Smile - . 笑 み. * definition of the smile *. a smile is a facial expression showing usually pleasure, amusement and

SMILE - . new possibilities for interaction in e- and m-commerce. work in progress. this set of slides is being

SMILE - . a simple way to make yourself seem more approachable. look up when walking. your feet will still be there, the