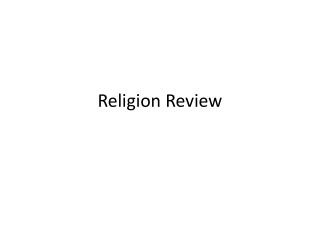 Religion Review. Pilgrimage. A journey to a sacred religious location. Caste. The class or order into which a Hindu is assigned according to religious law. Animism. The belief that objects and events in nature have a discrete spirit and conscious life. Ethnic religion.

How to write a review - . toby walsh department of computer science university of york www.cs.york.ac.uk/~tw/phd.