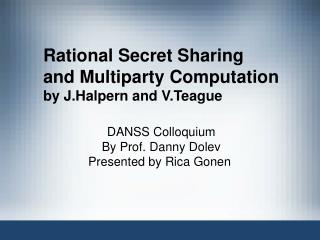 Rational Secret Sharing and Multiparty Computation by J.Halpern and V.Teague Rational Secret Sharing and Multiparty Computation by J.Halpern and V.Teague

http://www.crazybulkmagic.com/secret-allure-cream/ - Try not to overdo it with long hot baths and showers secret allure Rational Rose Tutorial - . making use of uml elements. objectives. get to know rational rose get familiar with general

6.1 The Fundamental Property of Rational Expressions - . rational expression – has the form: where p and q are