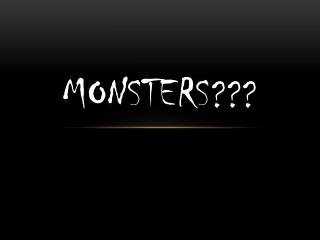 monsters ???. Hieronymus Bosch. Hieronymus, or Jerome, Bosch , b. c.1450, d. August 1516, spent his entire artistic career in the small Dutch town of Hertogenbosch, from which he derived his name. Monsters of Influence - Amazing monsters of influence have a distinct set of qualities. this presentation showcases the

The Monsters Are Due on Maple Street - . screenplay by rod serling. screenplay/ teleplay. play written for television.

The Monsters Are Due on Maple Street - . who are the real monsters?!?. who believes in aliens?. 60% of people believe

Who Wants To Be A Millionaire? - . moshi monsters. question 1. which category is the moshling cali in?. a mythies b

What Scares You? - . monster movies today and yesterday. overview. one: where do monsters come from? – myth, folklore

That was EPIC! - Jeopardy. save the drama for your mama!. that was epic!. ladies of the odyssey. gods and monsters. that