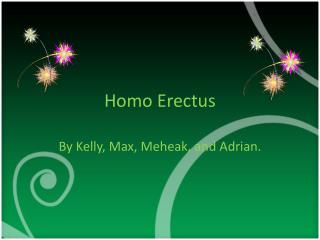 Homo Erectus - . remains have been found in the same strata and in close proximity to ordinary homo sapiens, suggesting

HOMO ERECTUS - . by jimena , rachel, marcus, brighton. introduction. prepare to go back in time and learn about the life

The man from Tautavel ( Homo erectus ) - . a rcheological discovery found in a grotto of the french eastern-pyrénées

The earliest dispersal of the genus Homo : Homo erectus and contemporaries - . oct. 14, 2008. introduction. the

There used to be several species of Homo - eventually gave rise to Homo erectus - - about 1.8 millions yr ago ( may be

Chapter 9 - . the earliest dispersal of the genus homo: homo erectus and contemporaries. chapter outline. a new kind of

Homo habilis - . homo sapiens. homo erectus. migrated from one place to the other. domesticated animals and settled