To Blog or not to Blog - PowerPoint PPT Presentation 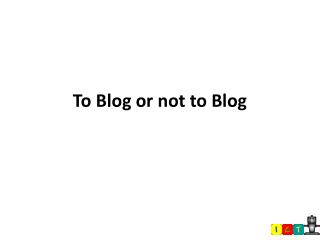 To Blog or not to Blog To Blog or not to Blog. What do Anne Frank and Samuel Pepys have in common?. Image by: Shutterstock/Janis Smits. They are both famous for keeping a diary…. (WW2 and Fire of London).

To Blog or not to Blog

Blogs - . by amer melebari – www.6efy.com. blogs. the definition of word blog in wikipedia:. a blog (a contraction of

Blogging and the Philippine Press - . overview and the pcij blog. the pinoy blogosphere. no definitive study of filipino

incomplete network - . your subtitle goes here. what is a blog?. a blog (short for web log) is “a website that contains

Engineering Village - Blogs &amp; rss what is a “blog”? we b log = blog a website powered by software that

Introduction to Blogging - Vincci kwong what is a blog? a “blog” (or “weblog”) is a web site that: is organized

LIVE INSPIRED - . live to learn. maryville blogs. what we’re going to cover. what is a blog? what can i do with a blog?

My F1 Blog - . what’s the blog about?. formula one originally going to be a sort of news type blog decided against this

LETS BLOG - . introduction. what is a blog? a “blog” is the blending of the two words “web log”. it is found on

To Blog or Not to Blog? - . matthew g. kirschenbaum assistant professor of english mith digital dialogues may 6, 2003.