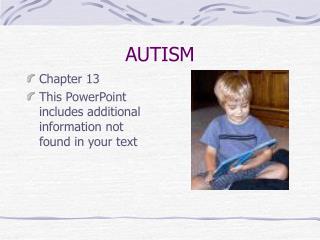 AUTISM. Chapter 13 This PowerPoint includes additional information not found in your text. Overview. What is Autism? Is there more than one type of Autism? What causes Autism? How is Autism diagnosed? What are the characteristics of Autism?