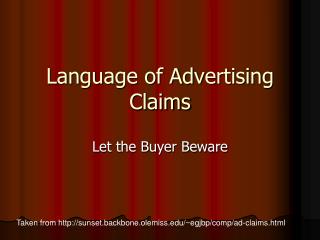 Language of Advertising Claims. Let the Buyer Beware. Taken from http://sunset.backbone.olemiss.edu/~egjbp/comp/ad-claims.html. The Weasel Claim. " Helps control dandruff symptoms with regular use ." The claim is not "stops dandruff."

FNS-209, THE STATUS OF CLAIMS AGAINST HOUSEHOLDS - . what is it?. a quarterly report which documents state agency (sa)

Presented by: - How to determine what is a reasonable accommodation. presented by:. natalie ivey, mba, sphr. current