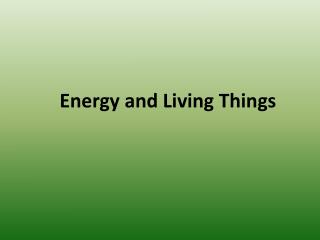 Energy of Living Things - . the process by which light energy is converted to chemical energy is called photosynthesis.

Energy and Life - . chapter 5. the flow of energy in living things. energy is the ability to do work. energy is

PHOTOSYNTHESIS Energy and Life - . living things depend on energy we need energy to play soccer, go fishing and even

The Sun : The Primary Source of Energy for All Living Things - . flow of energy. food pyramid : the amount of usable

Photosynthesis and Energy for Life - . energy for life. all living things are made of matter (atoms) and all living

Interdependence of Living Things - . + =. producers. organisms that have the ability to produce their own energy