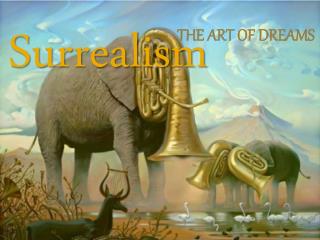 Surrealism. THE ART OF DREAMS. 1920’s. The Cultural Climate POST-WWl Art/Dadaism Surrealism developed out of the Dada activities during World War I. Philosophy: Freud and the Dream “Dreams are the key to theoretical understanding of the subconscious” Where Surrealism - . meets the absurd. the

SURREALISM, FREUD AND THE WORLD OF DREAMS - . by deano andrico. surrealism the practice of producing fantastic imagery or