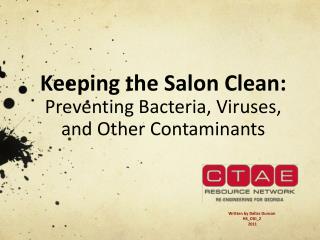 Keeping the Salon Clean: Preventing Bacteria, Viruses, and Other Contaminants Keeping the Salon Clean: Preventing Bacteria, Viruses, and Other Contaminants. Written by Dallas Duncan HS_CSII_2 2011. How Contaminants Enter the Body. Through a wound or other skin break Contaminated water or food Inhaling airborne pathogens

Keeping the Salon Clean: Preventing Bacteria, Viruses, and Other Contaminants

What is bioremediation? - . the use of bacteria and fungi and plants to break down or degrade toxic chemical compounds

Issues with Emerging Contaminants in Water - . what are “emerging contaminants”?. ppcps and edcs pharmaceuticals

Bacteriophage Isolation - . bacteriophage. obligate intracellular parasites that multiply inside bacteria by making use

Expression and Replication of the Viral Genome in Eukaryotic Cells: The DNA Viruses - . (how do dna viruses express their

CHAPTER 8 - . managing an on-premise laundry objective : examining how to manage a laundry within the hotel.