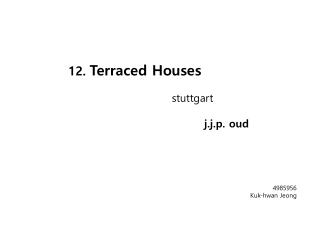 12. Terraced Houses stuttgart j.j.p. oud. 4985956 Kuk-hwan Jeong. 5 rowhouses by J.J.P. Oud in Weissenhof. This is five rowhouses that Jacobus Johannes Pieter Oud made in 1927 for the Weisenhof exhibition. At fi rst Oud got two assignments in What were the buildings like in London in 1666? - . these types of houses are called tudor houses because that was the