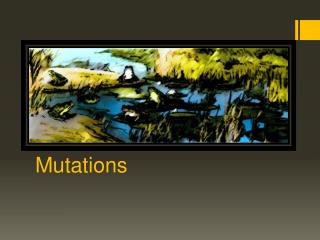 Mutations. Mutations. A Mutation is a change in an organism’s DNA It can occur naturally whenever a base is incorrectly copied, especially during DNA Replication . It can also occur as a result of DNA damage from environmental causes .

Gene Regulation in Eukaryotes - . outline of chapter 17. how we use genetics to study gene regulation using mutations to

Chromosomal mutations - . a mutation is a change in the dna generally, mutations are considered at the gene level, but

Chromosomal Mutations &amp; their effects - . karyotype. a picture of the chromosomes of an individual or a species,

Mutations - . exploring the source and exploitation of genetic alterations. is there evidence that dna itself can be

MUTATIONS - . fitness of mutations. the fitness of a mutation describes its value to the survival and reproductive

Mutations - . hollywood’s images of mutation. mutations. actual mutations in fruit flies. what is a mutation?. a

Mutations - . what is a mutation?. any change in the dna base sequence. what are the two different classes of mutations?.