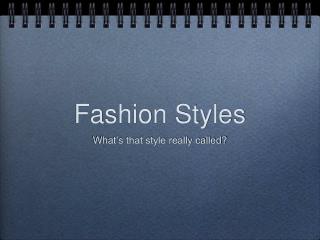 Fashion Styles. What’s that style really called?. FASHION. A particular style that is popular at a given time. STYLE. Characteristics that distinguish one particular item of clothing from another. Classic. Styles that stay in fashion for a long time, or never seem to go out of style.

Styles to Shop- Men Fashion Apparels - Buy men fashion apparels from oxolloxo.com. it makes a stylish wardrobe which will

Samyak Veera- Fashion Styles - If you are looking for designer and trendy fashion , then you can choose samyak veera

Fashion Styles - Click the box above. watch the recap of fashion week. sketch your favorite design of the season. (sketch

EMO Beliefs Values Research Attitudes Fashion Styles Music - . emo? what is emo? is it the music from the radio? is it

Styles Influencing Styles - . style influencing styles. music has a good deal of influence on itself sometimes from

Fashion Styles throughout the Decades - . by: annmarie stango. 1970’s women's styles. fashion in the 70’s for women

Fashion Styles - Is the particular style that is popular at a given time.usually refers to clothes but may include