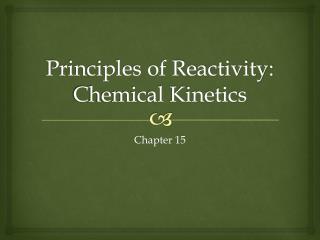 15 Chemical Kinetics - . chemical kinetics : the study of reaction rate ,  a quantity conditions affecting it, the

Chemical Kinetics - . chapter 14. chemical kinetics. kinetics essentially is the study of how fast a chemical process

Chapter 13 Chemical Kinetics - . how fast?. “clock” reactions. kinetics. studies the rate at which a chemical process

Chapter 14 Kinetics - Chapter 10 provided an introduction to kinetics and equilibrium. in this chapter we expand the

CHEMICAL KINETICS - . the branch of chemistry which deals with the rate of chemical reactions and the factors which

REACTOR KINETICS. What is reactor kinetics? - Reactor reaction on reactivity changes (whatever are the reasons of