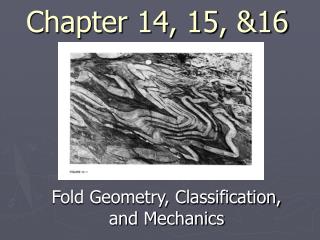 Chapter 14, 15, &16. Fold Geometry, Classification, and Mechanics. Fold Definition. Folds are wave-like structures that result from deformation of bedding, foliation, or other originally planar surfaces in rocks. Fold can be very broad to tightly compressed. CHAPTER 13, 14, 15 - . liberty and justice for all constitutional freedom, citizenship and equal justice. law in america.

Chapter 15 – 16 Circulation and Respiration - . the circulatory system. 1. the heart. your heart is an organ made of

Chapters 14, 15, 16 - . oceanography. oceanography essential questions. 1 . how does topography of the ocean floor

Chapter 15 &amp; 16 Review - . a person who acts as a messenger or representative a. shareholder b. commodity c.

Chapter 5 Text 14-16 - . as it is. living entity not the cause of action. modes of nature real doer. supreme lord is also