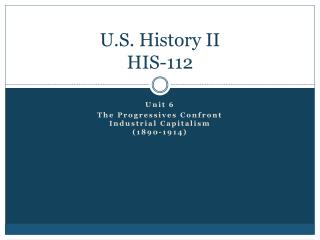 U.S. History II HIS-112. Unit 6 The Progressives Confront Industrial Capitalism (1890-1914). Progressivism. Progressive movement was actually a number of movements They focused on the problems created by a rapidly expanding urban and industrial world