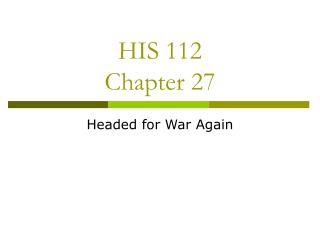 HIS 112 Chapter 27. Headed for War Again. At the same time FDR was president in the U.S., Adolf Hitler , head of the Nazi Party, became Chancellor of Germany (Prime Minister of the Weimar Republic) The president of Germany at the time was Paul von Hindenburg

Piano - . by: ariana. table of contents. chapter 1: what is piano chapter 2: scales and chords chapter 3: kinds of pianos

Chapter 3: Global Warming - Where we are . chapter 3lecture will finish chapter 3work all problemschoose one of 49, 50,