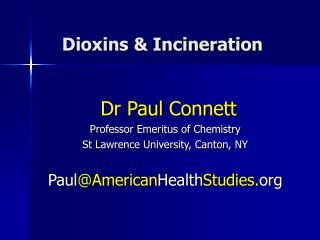 Incineration in Barbados - Barbados is part of a unep/gef pilot project for the development of ... and best environmental

Incineration - . and health care waste. internationally there has been a move away from incineration. this is true for

Gasification is Better for the Environment than Incineration - . by: janel schoenherr. waste management. there mission

Dioxins - . dioxins : a family of compounds including pcdds &amp; pcdfs with cl atoms at any of the 8 sites on the

[Submission L] Why say no to incineration! - . bobby peek groundwork friends of the earth, south africa. who is

Chlorinated Dibenzo -p-dioxins - . by: michael null, james ogletree , and cody christianson. what is it?. the epa

What is Incineration - . incineration is a waste treatment process that involves the combustion of organic substances