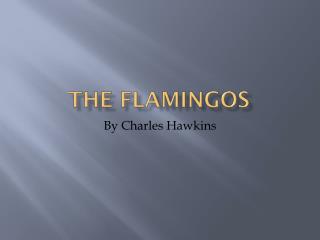 The ‘Fate’ of the The Anasazi - . anasazi native americans. the anasazi (&quot;ancient ones&quot;), thought

The Bass, the River, the Review - . you need to know these by tomorrow!. vocabulary. study your vocabulary words!!! learn

About Flamingos - . by bethany and luis . here’s some cool and wonderful information about flamingos. flamingos eat

Flamingos - . by krista and hannah. they have bright pink feathers. they live near shallow lakes and lagoons. they eat

The Good The Bad The Ugly - . presented by: duane hund k-state research and extension farm analyst. keeping the