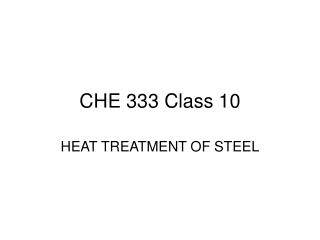 CHE 333 Class 10. HEAT TREATMENT OF STEEL. What and Why Heat Treat?. HEAT TREATMENT is THERMAL PROCESSING to OPTIMISE MECHANICAL PROPERTIES. By heat treatment a 10 to 1 ratio can be achieved between maximum and minimum Strength levels. CHE 333 Class 20 - . fracture continued. dynamic fatigue. fatigue is failure due to a stress being repeatedly applied to