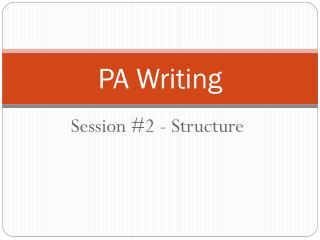 PA Writing. Session #2 - Structure. What we worked on yesterday. Rundown of the syllabus Rundown of the writing assignment Differences between high school, college and university writing Your expectations (What this writing course teaches you/what would you like to learn ?) WRITING FOR THE WEB - . make your web content easier to find and understand by your audience. contents.