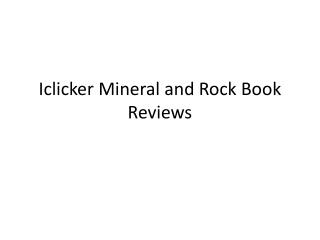 Iclicker Mineral and Rock Book Reviews. Cubic. Question 1. Which of the following is not a characteristic of a mineral? What are the 5 characteristics of a mineral? A. Naturally occurring B. Organic C. Solid D. Specific Chemical Composition E. Definite crystalline Structure. ROCK AND MINERAL TYPES - . minerals are chemical compounds, sometimes specified by crystalline structure as well as by

Mineral and Rock Resources - . mineral and rock resources . virtually everything we use or build or create in modern life

Mineral &amp; Rock - . composition of the earth. element. an element is a substance that cannot be separated into

The Rock Cycle and Mineral Resources - . rock cycle rules rock types can and will change. there is no preference with how

Book reviews - . expectations . you will have six weeks to read a book of your choice most of your reading will be done

Book Reviews - . 4 classes of readers. sponges that just absorb all they read sand-glasses who read to pass time

Book reviews - Nikki grimes is an author, poet, lecturer and educator who was born and raised in new york city. as the

Book Reviews - . what are they? how to write one. by mrs. cintrón. why write a book review?. one way to share a book

Book Reviews - . structure of the book review each book review has a catchy title that is different than the book holt:

Book Reviews : - . a quick review of what you should do. by dr. jennifer l. bowie for writing for academic publication.

Book Reviews - . what are they? how to write one. by mrs. cintrón. why write a book review?. one way to

iClicker - Easy to use easy to learn easy to hold. who invented? 3 physicists and 1electrician from university of

Rock/Mineral Exam – Next Week - . take advantage of the help sessions. samples on the exam will not be the same samples