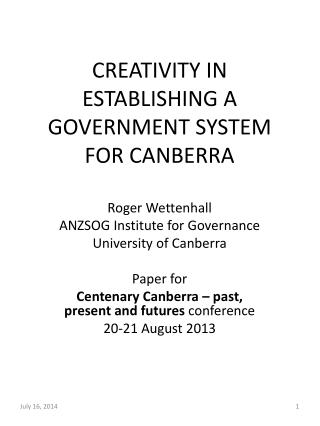 CREATIVITY IN ESTABLISHING A GOVERNMENT SYSTEM FOR CANBERRA CREATIVITY IN ESTABLISHING A GOVERNMENT SYSTEM FOR CANBERRA. Roger Wettenhall ANZSOG Institute for Governance University of Canberra Paper for Centenary Canberra – past, present and futures conference 20-21 August 2013. A Monument to Creativity.

CREATIVITY IN ESTABLISHING A GOVERNMENT SYSTEM FOR CANBERRA

Championing Creativity - . in the classroom and curriculum. presenters and contact info in alphabetical order. i ntroduct

Unit 2 Establishing Business Relations - . aims &amp; requirements. to enable s.s. to get to know the definition of

Creativity in VE - . no. yes. implementation follow up. information. function analysis. presentation. the phases of the