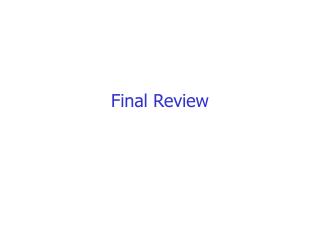 Final Review. SQL. Will be in the exam. So, refresh midterm review. Constraints as well. . Security and Authorization. GRANT Command. GRANT privileges ON object TO users [WITH GRANT OPTION] The following privileges can be specified: SELECT Can read all columns

Fall Final Review - . question. what is the treaty ending the revolutionary war, confirming the independence of the us

13: Final Review Intro Econ - . c.l. mattoli. intro. this will be a final review of intro econ. we warn that this is by

Sociology I Final Review - . 1. which discipline defines itself as “the systematic study of human society”?.

Your Final Review - . it’s the final countdown!. general knowledge. the main theatre at salem high school is a