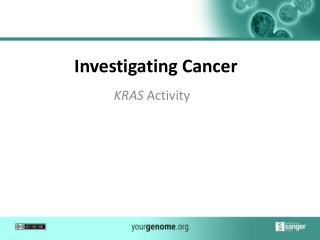 Investigating Cancer. KRAS Activity. What is cancer?. All cancers derive from single cells that have acquired the characteristics of continually dividing in an unrestrained manner and invading surrounding tissues.

Prevent Yourself from Cancer By Using Tomato Sauce - Tomatoes are known to be rich in minerals, vitamins and a great

Cancer Basics - . the abnormal, uncontrolled growth of cells, which if left untreated, can ultimately cause death 85

The Role of Urine cytology in the investigation of Haematuria? - . b barrass audit meeting 17 th may 2006. overview .

Vaginal Cancer - . vaginal cancer. rare tumor representing only 1-2% of all gynecologic malignancies 80-90% are