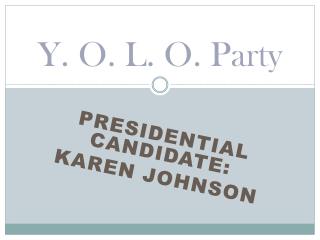 Y. O. L. O. Party. Presidential Candidate: Karen Johnson. Taxes. . Taxes are reasonable and necessary to have in this country. By paying taxes, it supports an individual in the United States who is unemployed by giving them benefits for stability. Chapter 16 Contracts: Third Party Rights - . learning objectives. what is the difference between an assignment and a

Party Leadership in the House and Senate - . american government mr. mongirdas. house of representatives. every 2 years,

The psychotic patients meet the Satir Model - Likewise, the party concerned always interacts with these people. ... the

Political Party - . political party - a party is a group that seeks to elect candidates to public office by supplying

British National Party - . by: jake z. and rylie b. ideology. the british national party (bnp) is a far right political

Sa handaan para sa Pasko (At a Christmas party) - . today, you will learn about:. what to do at a christmas party

WW II - . war begins. dictators seized control of their nations by force after ww i and during the depression. adolf