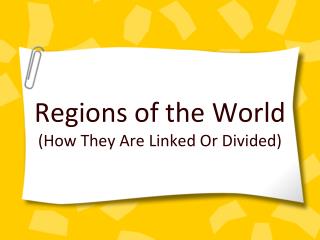 Regions of the World (How They Are Linked Or Divided )

Regions of the World (How They Are Linked Or Divided ). Language. How can language link or divide regions?. Think about some languages around the world and where they are found. Language.

Regions of the World (How They Are Linked Or Divided )

Introduction to Africa - . did you know?. africa has more countries than any other continent. the sahara is a desert that

The Four Regions of West Virginia - . human and environmental interaction. hei – the way we use, affect, and are

Regions of Canada - . covers most of the northern half o f north america shares many physical characteristics with the

AMERICA DIVIDED - The vietnam war. america divided. what do i do? . use the slides and video clips provided in the slide

Human Geography Unit 2 - . a branch of geography that focuses on the study of patterns and processes that shape human

Regions of Canada - . key terms province – a political division maritime – bordering on or related to the sea lock

Introduction to World Regional Geography - . a – realms and regions b – physical setting c – cultures and