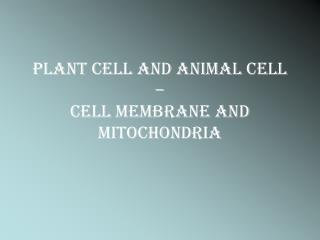 Plant cell and Animal cell – Cell membrane and Mitochondria. Cell Membrane. What is a cell membrane? The cell membrane is the very thin outermost layer of the cell that functions to keep the cytoplasm and organelles in the cell and other particles out. Cell/Prison Analogy - . by, timmy walsh. cell membrane/guards. the guards are like the cell membrane in the way that

Cell Structure and Function - . http://www.williamsclass.com/seventhsciencework/celltheoryparts.htm. flagellum. not in