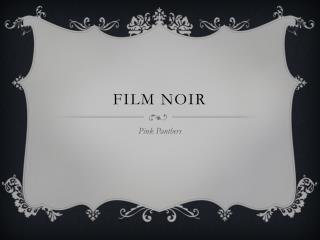 FILM NOIR. Pink Panthers. fILM noir. Film noir is a cycle of mainly American film in the 1940s to 50s, which explores the darker sides of modernity, and is usually set within a criminal themed film, or exploring the consequences of a criminal act. Origin.

Film noir - . film noir is a style of film using low key lighting and corrupt themes such as characters and settings.