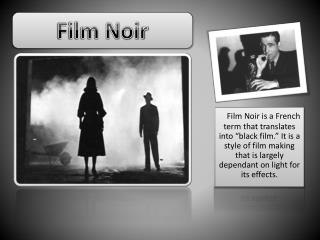 Film Noir. Film Noir is a French term that translates into “black film.” It is a style of film making that is largely dependant on light for its effects. What is Film Noir?.

Film noir - . film noir is a style of film using low key lighting and corrupt themes such as characters and settings.