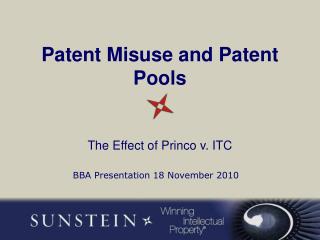 Patent Misuse and Patent Pools. The Effect of Princo v. ITC. BBA Presentation 18 November 2010. Terminology. Patents A and B are in a blocking relationship if the practice of each patent would infringe the other in the absence of a license. PATENT - . a patent is: a grant of a limited time monopoly by the state to an inventor to use, sell, distribute, license

Unique Search for Patent and Patent Application - Trademark search is a process to find unique mark, connect with

About Patent - Unified patents provides the basic facts about the patents. check out the variety of the surprising facts

Patent Law - . using your common sense and whatever patent knowledge you have, should this be patentable?